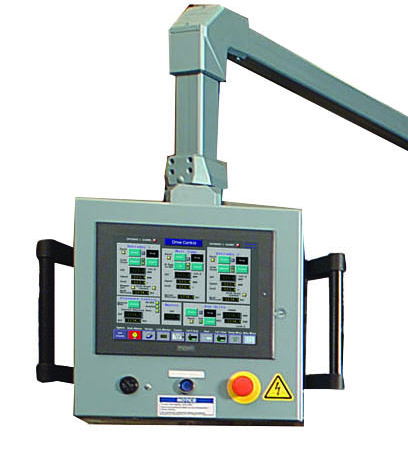 As the “brain” of the extruder, control systems make life easier and manufacturing better. But how do key control functions work, and what are some important factors to consider when making control decisions? In this 2-part series, we’ll cover topics that will help you navigate operations and the value to your processes.

In this first blog, we’ll take an inside look at two critical control functions required for extruder operation – barrel temperature and screw speed. Both are essential to supporting quality processing and bottom-line profitability. Then, in our next blog, we’ll review process monitoring, emergency stop and safety, and different control options.

Temperature controllers may be discrete, multi-loop (discrete) or PLC-based (Programmable Logic Controller). Discrete instruments are intended for a specific function vs. PLC which is programmed to perform a function. The basic components of temperature control include a temperature-sensing device (can be a thermocouple or RTD), a controller (discrete, multi-loop, PLC), and an output contactor for switching the power applied to the heater and output to cooling system. Barrel temperature control is critical for melt stability and viscosity of the molten plastic, which determines quality of the final product as well as extrudate size. This is even more critical when processing plastic materials with poor thermal stability.

Thermocouple configurations can be single or dual. A single thermocouple is placed in the barrel and sends a signal back to the controller to determine what heating or cooling is needed. The downside of the single configuration is that a period of time lapses before the barrel temperature stabilizes on the set-point, causing temperature fluctuations. Single-thermocouple is standard for all discrete controllers. When using a PLC application, you can employ the advantages of dual thermocouples, which are placed in both the barrel and the heat source. A calculation is performed by the controlling unit, and the temperature and time variances are minimized.

Extrusion temperature control systems also implement Proportional – Integral – Derivative (PID) control. These parameters are adjusted to regulate changes in temperature while maintaining the desired set-point. Proportional control is relative to the difference between the current temperature and the set point. It is effective for reducing the rise time of a process and it lessens the steady-state error. The integral control eliminates the steady-state error but makes the transient response worse. It also eliminates the “droop” caused by the proportional band. The derivative control affects the system by increasing stability and decreasing the overshoot and undershoot of the function, improving transient response. 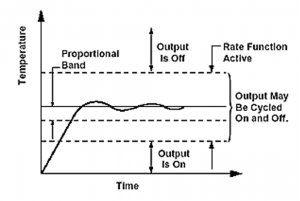 Screw speed control is achieved using a variable speed drive or motor. The types of drives include AC (most common), DC (older technology), and Servo (for smaller applications or when positioning is important). For the purposes of this blog, we will focus on AC drives/motors as they are the most common. Following is standard terminology used when discussing drive speed:

Open-loop – The drive controls the speed of the motor with no feedback. It assumes the motor is running at a set speed, which is not typical for extrusion.

Sensorless vector – This drive uses output voltages and motor characteristics to determine actual motor speed. This is typical for many extrusion applications.

Closed-loop – This one requires an encoder attached to the motor for actual speed feedback to the drive. It is needed for applications requiring a very low-speed operation.

Basic components of a drive section include a run command and speed reference. Most motors are balanced and tested to two-speed ratings, which include a base speed and extended speed. The base speed is the speed at which the motor operates given line voltage and frequency from the drive. The extruder drive/motor combination provides constant torque and variable HP output within the base speed range. The extended speed range is available on variable speed motors with the capability to extend the speed from the base by increasing output frequency of the drive beyond the line voltage supply. 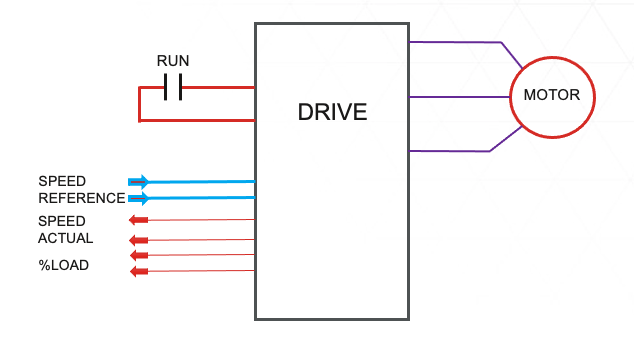 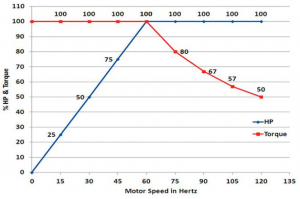 Our extrusion controls team is always available to discuss any questions you may have regarding barrel temperature or screw speed. Please comment below with your questions.

For any other questions, e-mail marketing.

Rate this post so we can give you more of the content you enjoy
[Total: 0 Average: 0]
You have already voted for this article